A classic car and a time gone by

This particular Versailles was purchased in the Spring of 1977, on "Automobile Row" in the city of Syracuse, New York, by a prominent Orthodontist named Bernard Naselli.  The car stickered for around $12,000 - expensive even for luxury cars at the time - and with the added options and taxes, I would bet Dr. Naselli plunked down around thirteen grand on the day he took delivery.  I'd like to believe it was a sunny day.  I can imagine the proud owner, cornering gently into traffic and picking up speed.  With the dealership in his rearview, I want to think he reached up and engaged the power moonroof, the wind blowing at his hair; his heart beating hard; the glorious smell of its rich leather and new materials, wafting through the cabin.  There's nothing like that fully alive feeling that comes to a man when he first drives a brand new car. 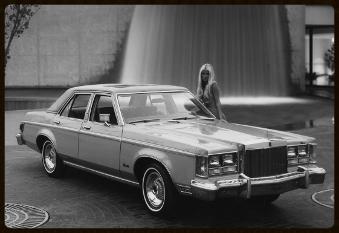 1977 Versailles publicity photo.  To my knowledge, the girl was not an available option.

Dr. Naselli drove the Versailles for about three years, mostly two and from his doctor's office on Syracuse's North side.  At some point, a CB radio was installed, but at present, the only evidence of the CB is a small bracket for the handset, which remains mounted to the vinyl, near the floor shift.  Sometime in 1980, he decided he wanted a new car, and the Versailles was sold to his father, Dr. Joseph Naselli.

Joseph Naselli was an elderly man; yet he drove the Versailles aggressively at times around town.  At other times, he would drive very slowly and refuse to yield to other drivers.  For reasons that are not entirely known, he kept a plastic cap gun in the glove box.  The toy gun remains in my possession.  In 1988, at the insistence of his sons, Bernard and Richard, the keys were taken from Joseph, and the car was placed in storage, where it remained until September of 2016!

In the Fall of 2016, Richard Naselli, a local businessman, removed the car from storage not long after his brother Bernard passed away, and he prepared the car for its first re-sale.

Richard replaced the battery, tires, and the exhaust system.  He provided a tune-up, and some gas, of course, and turned the key.  The Versailles roared to life.  Richard parked the car on the main street, in Liverpool, NY, and placed a 'for sale' sign in the rear window.

Enter me.  I passed the car several days in a row, on my way to work.  My wife made a comment: "Wow, check out that old car", a remark which I of course took as permission to give the old Lincoln a closer look.

On 09/12/16, after meeting with Richard Naselli and agreeing to the terms, I purchased the Versailles.  It was a hot day for September, and I remember sweating nervously while I waited for my number to be called at the DMV.  With my plates secured, I hurried back, a mix of thrill and trepidation, to retrieve the old Lincoln.  Below is a picture my wife took, after I cornered into our driveway.  (See the Versailles Blog Page for further entries about my ownership of this fine American relic). 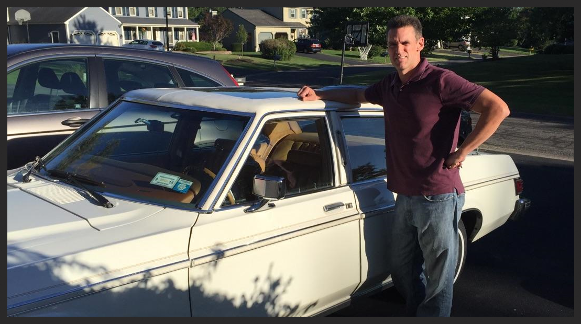